It All started With the Word No

February 23, 2019 Comments Off on It All started With the Word No Inspiration, Uncategorized  3 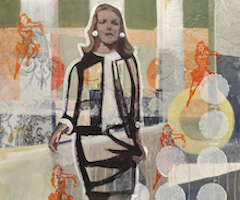 There are No Women Artists

As the 2019 International Women’s day approaches in March, I am once again reminded of where my creative voice started.

It started with the word NO-

No you can’t do this because you are a woman. The message was that because I was a woman I would be paid less, be a target for violence, and be expected to expect less. These ideas made me angry. After finishing my first University degree I realized that my goal was to make art that could help cultural social change. In other words, make art that would change people’s minds.

It was to change the vision of women and make a living from it. This may sound like a naive idea. How do I make social change through Art? My answer? Just make the work and put it out there.

However the word No was loud in my head as I looked to using Art as a way to make people aware of the woman’s voice and experience. My theory was that by doing this I could make the viewer realize that women should be honored and respected.  I soon realized that “No” I can’t make a living in art because there aren’t any other women out there to look at.  In the late 1980’s there were very few women represented in the private galleries and public museums. Looking around I saw little representation or role models.

Lessons my Father Taught Me

When I was a child, my father told me I could do anything I wanted. However this was not the message I got when I was completing my first degree in Carleton University in media theory. I soon realized that, through typical “consciousness raising” feminist education , that it is a uphill battle for women. The lack of representation in museums, galleries was being highlighted by women art collectives. For example, the Guerilla Girls was drawing attention to the fact that very few women were being exhibited in major musuems.  In addition,  there was also the push for the National Women’s Museum of Art in Washington DC.  The voice was slowly finding its way to the surface. Yet there was, and still is, a systematic lack of representation of women in Art distribution channels. Art was being made- it was not being shown.

Yet I could not accept that the public- people like myself- did not want to have women’s art hanging in their home. Artists that peppered history such as Mary Cassatt, Emily Carr, or Georgia O’Keefe were out there. The issue was not that there were no women artists. The issue was the distribution. The male voice permeated through the levels of jurying and  the acceptance into the galleries. Selection did not highlight the woman’s voice. So how do I bypass this gatekeeping structure? How do I get my work shown?

Find the Collector, Find the Voice

My solution? To bypass the selection process. To go directly to the client and find my collector. Above all,  let the public decide for themselves. Over the past three decades I have worked with over 20 different galleries. Every gallery was managed or owned by women. I was able to get into these galleries by first proving I had a buying public. I had found my own client and I convinced the dealers that they could capitilize on my work. It was a sharing with the gallery. The way I did this was through competitive art fairs.  These marketing outdoor events gave me access to the public.  I could sell directly to the collector who came to these events and I could convey my message and voice one on one.

Message has to be Subtle to have an Effect

This process also gave me a clearer vision of my message. I soon realized that to be political and feminist was not a selling point. In the early 90’s the public was not ready for the feminist voice.   I became aware that I did not have to describe the woman’s situation. I had to be authentic and convey what IS the woman’s voice. Who am I? What do I do? I am a partner, a mother and a strong woman. Three elements that have developed in themes in my work. Themes of Cityscapes (which is the setting for romance and partnerships with my husband), Women images (strong vibrant dynamic images) and finally Home Sweet Home (images from the domestic space) My belief is by portraying these stories, the woman’s voice is empathized with by the viewer. The collector sees themselves in this art and renews/reaffirms their own belief systems.

So Where are We Now?

Now we are in the age of social media. As a result, more women can use the tools of media to amplify their voice. The museums still do not show women’s art except through a token few. I am often amused when colleagues mention to me to see a particular woman’s show at the Art Gallery of Ontario, as though this is the representation of many. Imagine if you walk into the National Gallery and the entire museum has women’s art hanging and only one or two male artists. Imagine what that would look like. In October the Tate Gallery in London said they were doing this courageous act. If only for a brief period of time. It does give us the thought that eliminating 50% of the voice does not represent our culture. It does not reflect who we are. 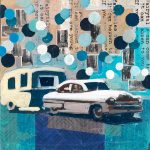 Memory; Reality or Lie?
Next Story » 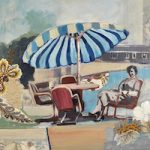